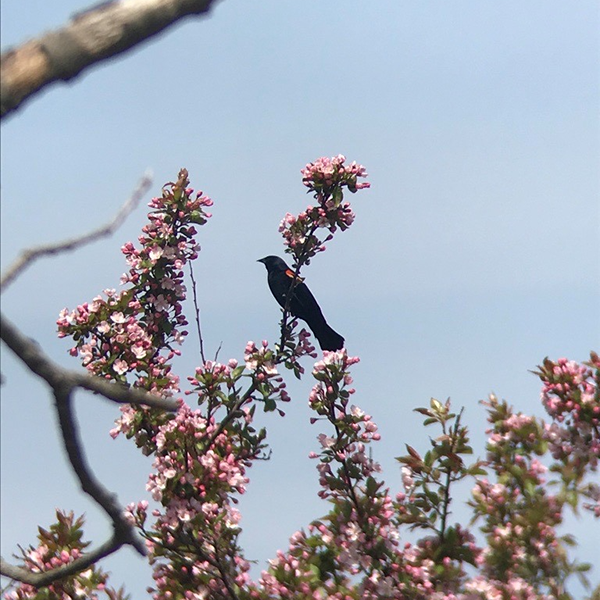 A photograph of a black songbird sitting amongst a cherry blossom image against a blue sky.

As we come into June, let’s look back at what has been a beautiful spring and consider some of the many ways that the world has come alive in the last few months.

One of the first signs of spring are warm rains that usher in a flush of flowers, avian and amphibian migration, and some welcome humidity to relieve the dry hands of New England’s masses. This annual phenomenon is often boiled down to a single phrase: “April showers bring May flowers.” This phrase, ubiquitous enough to cover my entire office, places phenology into our collective psyche. Imagine my shock, going through precipitation data collected right here in Boston from 1871 to 2015, when I found that March is actually the unsung hero of our spring blooms. Not only this, but March is only Boston’s second wettest month. November takes the annual precipitation title, coming in with an average total precipitation more than a quarter inch higher than April’s over that 144 year collection period. Disillusionment aside, we still love April and here we will dive into the forms and functions of a changing landscape and discuss a word I used earlier: phenology, to put the spring in perspective.

Phenology is “the study of cyclic and seasonal natural phenomena, especially in relation to climate and plant and animal life.” “April showers bring May flowers” is a cause and effect observation that fits that definition to a T, even if the timing is a little off. That timing disconnect can be explained by the 15th century English poetic origins of the phrase: “Sweet April showers do spring May flowers.” While western Europe is significantly farther north than New England, the two places have similar climates due in large part to the Gulf Stream. The Gulf Stream is a strong ocean current that sends warm Caribbean water north along the east coast of North America before crossing the Atlantic and ending up in the Norwegian Sea. Warm water – that reaches us before the west coast of Europe – increases air temperatures and introduces humidity as the days lengthen, resulting in thawing spring rains.

Spring phenology in forests can be illustrated with a ground-up approach that roughly parallels the succession, or growth, of the forest itself. In forest succession, it all starts with what are called “pioneer communities” of lichens and lithophilic, or rock-loving, plants that grow on barren and seemingly inhospitable ground. These organisms build soil, block wind, and even break down stone to create a more suitable habitat for themselves and, consequently, the opportunity for other organisms to enter. Early spring rain thaws the soil and encourages dormant plants and macro invertebrates to become active. Water is less dense when frozen, meaning that as it freezes it expands. This expansion pushes soil particles apart and, upon thawing, creates cracks for plants to push through. With the pioneering thaw, the motions of such organisms as worms and beetles and ground nesting bees continue to loosen up and aerate the soil. We can continue to move up the food chain in this early stage to an elusive and mysterious creature: the Spotted Salamander.

Spotted Salamanders are large amphibians that belong to a group called Mole Salamanders, named for the fact that they spend the majority of their lives underground. As amphibians, salamanders are cold-blooded and they must maintain a certain level of moisture on their skin to survive. This combination makes a warm spring rain the exact thing that Spotted Salamanders need to migrate from their winter burrows to breeding grounds in vernal pools and shallow streams, recently swelled by the rain themselves. These pools will linger, but dry up significantly if not entirely over the course of the year.

I went out one rainy April night in search of these amazing creatures. With a flashlight I started slowly down a trail in Middlesex Fells, as my eyes adjusted I started to see the forest floor writhing. Earthworms, evacuating saturated soil in search of air, were out in such numbers that they moved the leaf litter around them. Along with the worms, there were beetles, fresh flower buds and mushrooms, and moths whose eyes shone in the beam of the light. All of this life, responding to the rain. We were unfortunately unable to find any salamanders that night, but the show was stunning nonetheless.

One of the laws that determines phenological and successive flow is” resource availability.” This cold term refers to how readily accessible something is to an organism at a given time, and understanding the concept can add beauty and depth to the everyday. One often overlooked “resource” is sunlight. Access to sunlight impacts the life of a plant across the board. In winter and early spring we are afforded expansive views within the forest, seeing up to a couple hundred feet at times, commonly seeing cream-colored tufts of Beech leaves that never fell or the gleaming white bark of a Sycamore punctuating the gray-brown pallet of trunks and leaf litter. Compare these observations to the dense foliage of summer, and it starts to become clear how access to sunlight might change over the course of a year.

This brings us to May, and one of the stars of the woodland show: spring ephemerals. Spring ephemerals describe a group of wildflowers that pop up early, stay low, get their flowering done, and return to the ground with whatever energy they could scrounge up before the canopy fills in and shades them out. These plants are often small and inconspicuous before flowering, but they can be strikingly beautiful as well, providing a perfect balm for winter-weary naturalists. This phase of rapid growth parallels the scrub-shrub stage of succession where sun-loving plants like Goldenrod and Milkweed take over an area in the form of meadows and grasslands before early-successional trees like Cedar and Sweetgum move in. These plants continue to build and add nutrients to the soil while also producing much needed nectar and food for herbivores.

Given the limited time that spring ephemerals are active in a given year, they are especially susceptible to the challenges presented by invasive plants. One plant, Garlic Mustard, is especially bad for our native spring ephemerals. Garlic Mustard emerges early, and rapidly forms a carpet of foliage that outcompetes surrounding species. To make matters worse, Garlic Mustard is what’s called “allelopathic” meaning that it reduces competition by releasing chemicals that make the surrounding area more difficult for other plants to grow in. So, with the challenges of time and competition in mind, I implore you and anyone you know who might seek out spring ephemerals, to please be respectful; step carefully and stick to trails. Time is precious for these plants and they are easily disturbed.

The two spring ephemerals I will highlight here are the Yellow Trout Lily and Bloodroot, showing dramatic yellow and white flowers respectively. The Trout Lily, named for the pattern on its leaves, is most often seen without its flower. The leaves, lancellate and waxy, are dark green with purplish-brown spots that reflect the pattern of a brook trout. Though, when I see a Trout Lily leaf, I am reminded of the stippled light that comes through a leafless forest canopy in early spring. When it does flower, which is not every year, the Trout Lily sends up a long reddish stalk that supports a bright yellow flower with six, recurved petals. From the center of the flower extend large stamen covered in dark red pollen that surround a yellow-green pistil. These dramatic flowers are an incredible sight. The Bloodroot has larger, more flamboyant leaves of light green that curl back around its stem and divide into many lobes. The flower is a more classic shape with eight to twelve white petals extending from a yellow center. The peak flowering time for these species around here is mid-to-late April and into early May. Bloodroot showed up in stunning form and numbers during the City Nature Challenge this year.

Now as we come into June the forest is shaded, butterflies are floating around, birds are on nests, and the weather continues to heat up. As Boston comes alive, programming at the Boston Harbor Islands State and National Park is hitting its stride. We are ramping up opportunities in and around the park with Stewardship Saturdays, the ferries running to Spectacle and Georges Islands, and camping set to start up on Peddocks Island! We hope you have all had a wonderful spring and hope to see you out enjoying the summer sun soon enough! Visit our website to learn more: https://www.bostonharborislands.org/