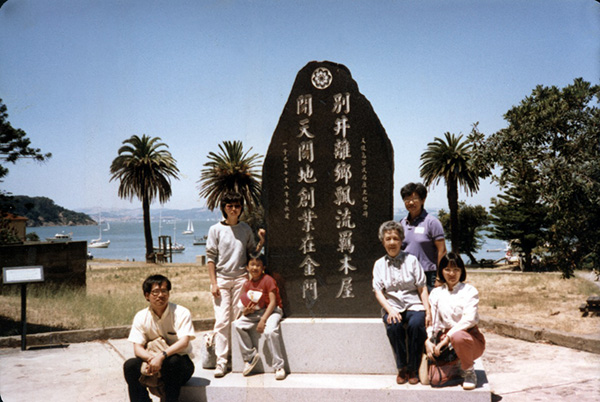 Image courtesy of The Digital Commonwealth

Chinese Progressive Association members sit around a Chinese monument at Angel Island Immigration Station, during a trip to San Francisco.

These telling poems were written by overseas Chinese on the walls of the Angel Island Immigration station, located in the San Francisco bay. Between 1910 and 1940, as many as 175,000 Chinese immigrants were detained and processed at Angel Island. Because of the Chinese Exclusion Act, Angel Island served more as a detention and deportation center than an immigration processing center. Thousands of Chinese were detained and interrogated at the barracks in a prison-like atmosphere for weeks, months or years. Life for the detainees was strange, stressful, demoralizing, and humiliating. Separated from family members, they were placed in crowded communal living quarters. One hundred persons would sleep in bunk beds, three high in columns, in a room about 1,000 square feet.

There are tens of thousands of poems on these walls
They are all cries of suffering and sadness
The day I am rid of this prison and become successful
I must remember that this chapter once existed
I must be frugal in my dailyneeds
Needless extravagance usually leads to ruin
All my compatriots should remember China
Once you have made some small gains,
you should return home early.

Written by one from Heungshan

The sea-scape resembles lichen twisting
and turning for a thousand li.’
There is no shore to land and it is
difficult to walk.
With a gentle breeze I arrived at the city
thinking all would be so.
At ease, how was one to know he was to
live in a wooden building?

Because my house had bare walls, I began
rushing all about.
The waves are happy, laughing “Ha-ha!”
When I arrived on Island, I heard I was
forbidden to land.
I could do nothing but frown and feel angry at heaven.

In the quiet of night, I heard, faintly, the whistling of wind.
The forms and shadows saddened me; upon
seeing the landscape, I composed a poem.
The floating clouds, the fog, darken the sky.
The moon shines faintly as the insects chirp.
Grief and bitterness entwined are heaven sent.
The sad person sits alone, leaning by a window.

America has power, but not justice.
In prison, we were victimized as if we were guilty.
Given no opportunity to explain, it was really brutal.
I bow my head in reflection but there is
nothing I can do.

I am distressed that we Chinese are
in this wooden building
It is actually racial barriers which cause
difficulties on Yingtai Island.
Even while they are tyrannical they still
claim to be humanitarian.
I should regret my taking the risks of
coming in the first place.

I thoroughly hate the barbarians because they
do not respect justice.
They continually promulgate harsh laws to
show off their prowess.
They oppress the overseas Chinese and also
violate treaties.
They examine for hookworms and practice
hundreds of despotic acts.

This is a message to those who live here not
to worry excessively.
Instead, you must cast your idle worries to
the flowing stream.
Experiencing a little ordeal is not hardship.
Napoleon was once a prisoner on an island.

As you read these poems about Angel Island, think about the stories from Ellis Island, the island in New York Harbor where so many European immigrants were processed between the later part of the 19th and early 20th centuries. The stories are very different as are stories about European immigrants to Boston during the same period. Many of them were processed in the buildings owned by the ship companies which brought them there. The next time you are on State Street look for the Cunard and India Buildings where thousands of immigrants were processed more than 100 years ago.