Home to the historic Civil War-era Fort Warren, Georges Island is the ideal destination for any history enthusiast.

The graceful granite archways of historic Fort Warren will greet you as you arrive for your visit to Georges Island. This Civil War-era fort is the main attraction of Georges Island and it is sure to bring out your inner history enthusiast. The construction of Fort Warren, built to protect Boston, began in 1833 and took nearly two decades to complete. Nearly obsolete upon completion, the island was used as a training facility for Union soldiers during the Civil War. During your next trip to Georges Island, enjoy a picnic, explore with a ranger-guided tour, or stop by the visitor center to delve into history — and be sure to ask about the legend of the Lady in Black!

While the Boston Harbor Islands Partnership strives to create a public space that is welcoming and accessible to all, most islands do not currently meet ADA accessibility standards. The park is working to rectify this. Please contact us for any further information to help you plan a comfortable and enjoyable trip. 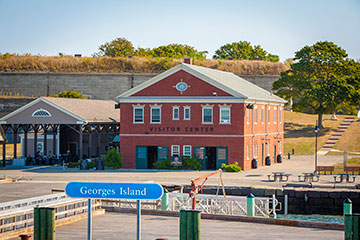 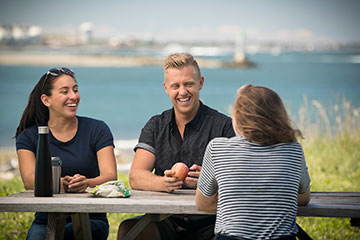 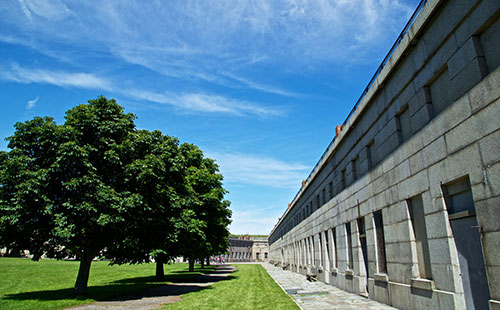 Travel back in time and explore the rich military history of the resilient Fort Warren.

Completed just after the start of the American Civil War, Fort Warren now serves as the main attraction of Georges Island. This massive structure, composed of stone and granite, was constructed between 1833-1860 and was initially built as part of a broader network of coastal defense. It once served as a training facility for Union soldiers and functioned as a prison for Confederate officers and government officials during the Civil War. The fort held a number high ranking civilians, including Confederate Vice President Alexander Stephens and Confederate Postmaster General John Reagan.

Fort Warren continued to operate as a staple of harbor defense through World War II and was decommissioned in 1947. Visitors to Georges Island can explore the fort’s bakery, parade ground, and Dark Tunnel.

Georges Island is owned and operated by the Massachusetts Department of Conservation & Recreation.