Home to the National Historic Landmark, Boston Light, this little island is steeped in U.S. history.

The historic Boston Light overlooks the sea from Little Brewster Island, casting a light beam 27 miles into the Atlantic. This island is home to the oldest continually used and last staffed lighthouse in the country, which dates back to the Revolutionary War. Prior to housing Boston Light, the island was used for sending signal fires to aid novice travelers navigating the dangerous sandbars and unpredictable weather. 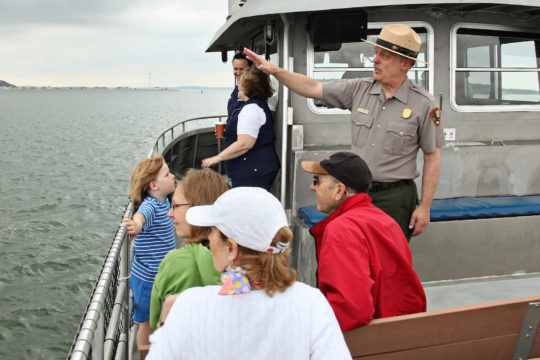 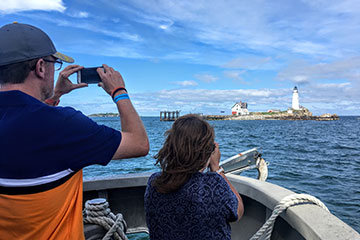 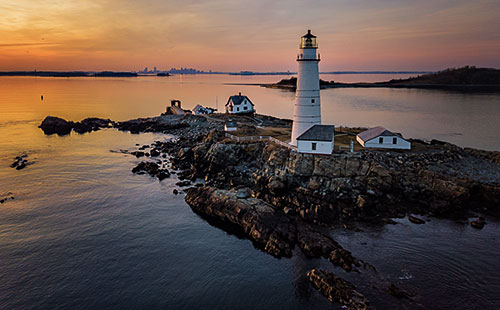 Come explore the oldest continually operated light station in the country and learn of its rich history guiding travelers safely to Boston Harbor.

Boston Light was first lit on September 14, 1716, and was operated by its first keeper, George Worthylake, who also acted as pilot for vessels entering the harbor. Unfortunately, George, his wife and daughter, and two men drowned in 1718 after their boat capsized returning to the lighthouse. Benjamin Franklin went on to write a ballad about the event, entitled “Lighthouse Tragedy.”

The lighthouse survived invasion and war over the years. In 1774 the British overtook the island and Boston Light was partially destroyed. A new lighthouse was erected in place of the old in 1783, which still stands today. The tower was later raised to 89 feet in the 1850s to accommodate the new second order Fresnel lens.

Today, the lighthouse is permanently manned by its first female keeper, Dr. Sally Snowman. Its light, which was first provided by candles and then oil lamps, reaches 27 miles to survey the harbor.

Join us on a guided Lighthouse Tour!

Little Brewster Island and Boston Light are owned and operated by the U.S. Coast Guard.