Secluded beaches and abandoned fortifications will give you plenty to explore for a day trip or overnight visit.

The sprawling bright, blue Atlantic Ocean rises and falls along the beaches of Lovells Island. Granted to Charlestown during the colonial period for timber harvesting and fishing, Lovells Island is the site of many shipwrecks, including a French warship. The island was also considered as a proposed location for the Statue of Liberty.

Take a hike along the rocky coastline, discover the wonder of tidepools, or embark on a camping trip to enjoy the sounds of the harbor at night. Explore the foundations of Fort Standish and the old gun batteries and bunkers. Visitors can go for a swim and take in some of the most spectacular views of the outer harbor including Boston Light, sunrise over the Atlantic, or sunset over the Boston city skyline.

While the Boston Harbor Islands Partnership strives to create a public space that is welcoming and accessible to all, most islands do not currently meet ADA accessibility standards. The park is working to rectify this. Please contact us for any further information to help you plan a comfortable and enjoyable trip. 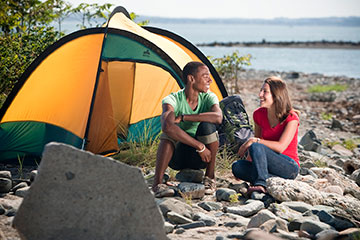 Bring your own food and water – there is no food service or water source on the island. Areas of the fort should be approached with caution. Remember to carry out all trash.

Lovells Island is owned and operated by the Massachusetts Department of Conservation & Recreation.