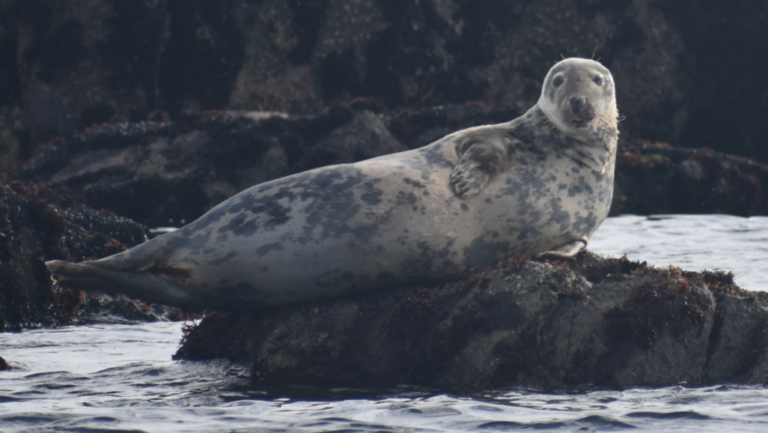 Stephanie A. Wood, Ph.D.; UMass Boston – School for the Environment

Seals have long attracted human interest with their dog-like appearance and ability to seamlessly move between land and sea.  Boston Harbor and its islands are home to harbor (Phoca vitulina concolor) and gray (Halichoerus grypus atlantica) seals.  Both species were historically distributed along the coast of the northeast United States until bounty systems in Massachusetts and Maine during the 19th and 20th centuries drastically reduced these populations.  Two important laws (Massachusetts’ 1965 law protecting gray seals and the Federal 1972 Marine Mammal Protection Act) added protection from hunting and harassment.  In the forty plus years since the passage of these laws, both species have recovered and recolonized parts of their former range.  We know from archaeological records and historic accounts that seals were present in Boston Harbor prior to their local decline.  The 2 archaeological records were found on Spectacle and Thomson Islands respectively along with colonial accounts of seals on Grape and Peddocks Islands.  On Grape Island, Captain Billy McLeod adopted a seal pup as a pet and described the animal as more affectionate than any dog he had ever had!  My current project uses monthly boat-based surveys to document the spatial and temporal use of the Boston Harbor Islands by seals.  To date, the highest, single day count (a minimum of 60 animals) occurred in April 2020.  These surveys have found seals hauled out on six of the Boston Harbor Islands regularly.  Several seasonal trends have been observed.  Surveys during the summer months have found a low number of harbor seals  – most harbor seals are in Maine from May to August for pupping and molting.  And while adult gray seals are predictably found at The Graves for most of the year – they are notably absent in the winter months (December/January) when this species is pupping in areas such as Nantucket Sound and the mid-coast Maine region.  The two species can often be found hauling out together on Harbor Islands such as Calf and Hangman’s.  Next steps for this project include collecting scat for diet and health (microplastics, microbiome) studies and building a photo database of individually identifiable seal to investigate residency time and individual site fidelity.  Given most seals are found further from human activity, the presence of seals in the Harbor presents a unique opportunity to study these species in an urban setting.  Their presence is a reminder that wildlife can be found all around us and are reflective of a healthy habitat!  Special thanks to the Massachusetts Environmental Trust for funding this study, the Boston Harbor Islands National and State Park for their partnership, Captain Russ Bowles and UMass Boston students Warrenkevin Henderson and Caitlin Fitzmaurice.