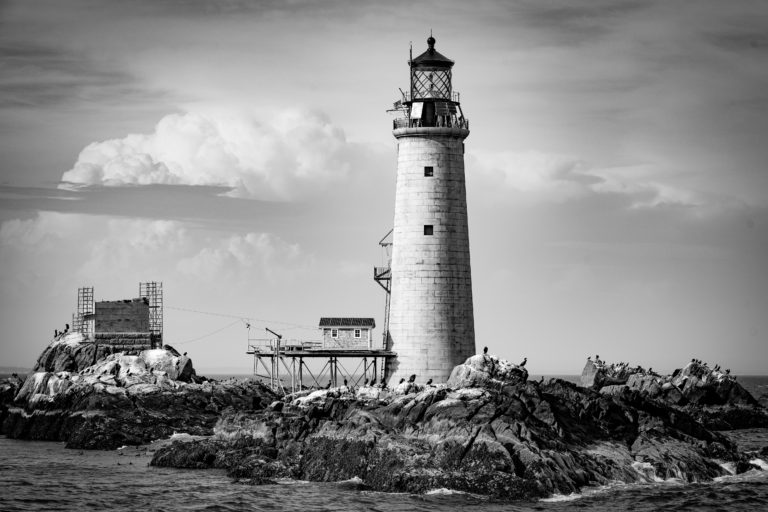 Alt text: Lighthouse with wave crashing against the shore and storm clouds overhead; black and white.

Ominous, foreboding waves thunder against rocks at the far reaches of Boston Harbor, resembling gravestones as they breach the ocean’s surface only to be swallowed by the tides once more. Standing tall against the onslaught, a lighthouse grey in color, locked in constant battle, David verse Goliath, the lighthouse and the sea. This spooky spotlight, aptly named The Graves, is the subject of our most haunting lighthouse installment yet.

Out from the ocean’s tumultuous breast,
Long, long have thou lifted thy black jagged crest: Long hast thou ruled, a cruel despot, the waves

At Boston’s fair entrance, Thou menacing Graves.
Fierce rage the waters, but fiercer the shock
When shattered to spray on thy breastworks of rocks; Loud shrieks the wind, but more wildly it raves

When torn by thy summits, Thou merciless Graves.
Now thou art conquered, thy terrors are gone; Grim death is displaced, and life sits on thy throne: Secure on thy rock the light shines that saves
And guide to the haven, Thou welcoming Graves.

Originally named after Rear Admiral Thomas Graves, who sailed to Boston with John Winthrop in 1628, Graves Ledge consists of a series of rocky outcrops at the outermost edge of Boston Harbor. Located about 4.5 miles away from land, most of the ledge is submerged at high tide, creating a deadly peril to passing ships. While rather aged in appearance, the Graves light station is actually one of the youngest lighthouses in Massachusetts, with construction completed in 1905. A series of signal buoys previously warned sailors of the danger, but when the area opened up as a new major shipping lane for larger vessels in the early 1900s, the need for a lighthouse became much more dire.

Congress appropriated $178,000 in 1902 for construction to begin. Granite was cut from Cape Anne in Rockport with lighthouse builder Royal Luther of Malden charged with its construction. The seven-ton interlocking stones forming the first 40 feet are pinned to each other and the ledge with heavy wrought-iron spikes. Standing at 113 feet tall, Graves Light is the tallest light in the harbor, and on September 1, 1905, Keeper Elliott C. Hadley lit the brightest light north of Cape Cod for the first time. The helical glass lantern at the top is cast from 44,000 lbs of bronze and originally housed a Fresnel lens of the first order, the pinnacle of illumination technology for much of the last two centuries. Created by French physicist Augustin Fresnel (Freh-nel), these lenses revolutionized maritime navigation. Using a series of cut and angled prisms to better refract and reflect light, what was once 60-80% of light lost in a beacon was lowered to less than 20%. Beautiful and precision-made, a first order lens is the largest in the series. With a height of 12 feet, a diameter of 7 feet, and sitting atop a bed of liquid mercury, the Graves light ensured the safe navigation of vessels through the area surrounding Graves Ledge.

Even with this technology, disaster has still struck. In 1938, the 419-foot steamer “The City of Salisbury” crashed into a reef due to inaccurate depth charts not far from The Graves. Aboard was a cargo of animals ranging from pythons to cobras to monkeys and 20 crates of rare birds. The ship eventually split in two and while no human life was lost aboard the “Zoo Ship,” most of the animals were saved, although decades later, a monkey skeleton was reportedly found on one of the other harbor islands. The Salisbury eventually sank and parts of it were raised and sold as scrap.

As with all things in time, the Fresnel lens and the mercury housing began to deteriorate. The three-man crew was replaced by automation, and a modern, VRB 25 lamp replaced the magnificent first order Fresnel in 1976. The original lens was taken away to be placed in storage at the Smithsonian Institution.

Then in 2012, Graves Light Station was declared Federal Surplus and offered free to surrounding towns and nonprofits. Finding no takers, it was sold at federal auction to a Boston businessman, Dave and Lynn Waller, for nearly $1 million dollars in September of 2013. Since then, the Wallers have been dedicated to the preservation and restoration of this historic lighthouse structure. The rusty iron pier and stairs were sandblasted and painted, floors, walls and ceilings were rebuilt, and a functional bathroom and kitchen were installed in the tower. Part of the extensive restoration includes the installment of a Fresnel lens constructed from scavenged pieces of Australian lenses built between 1880 and 1920. With this inspiring story of renewal and restoration, we look forward to seeing the Graves Light standing strong on the horizon for another 100 years to come.

To learn more about this preservation effort, check out graveslightstation.com.