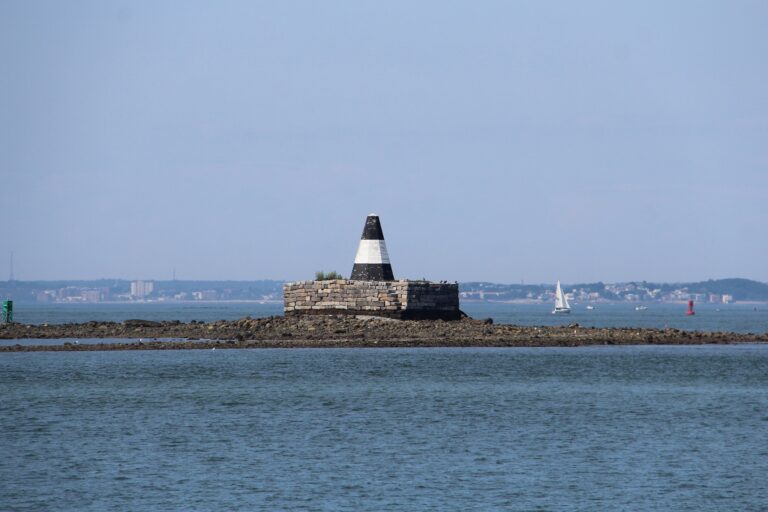 Distinguishing Markings: Hexagon-shaped, black and white alternating stripes
As you make your way into Boston Inner Harbor through the traditional shipping channel known as The Narrows, you will sail past a black and white striped cement cone about twenty feet high. The cone is a day marker, helping mariners avoid the rocky flats and a sand spit it sits upon.

This unusual navigational aid sits upon a unique island known as Nixes Mate. When the island was originally granted to John Gallops for use as pasture land in 1636, it was noted that it was roughly 12 acres in size. The reason behind the gradual erosion of the island and the name its self is tied to a long standing legend associated with it.
The legend has it that a Captain Nix was betrayed by one of his mates and as punishment, the mate was abandoned or executed on the island. However, despite his condemnation, the mate continued to profess his innocence. Before his demise, the marooned man cursed the island. He said that the island would disappear beneath the waves to prove that he was not guilty. Now the island stands at just roughly 1 acre at low tide.

While the legend of Nix and his mate may or may not be based completely in imagination, crime upon the high seas did leave its mark on the history of the island. The shipping traffic entering and leaving the port of Boston proved to be very tempting to those sailors who decided to sail on the wrong side of the law. During the Golden Age of Piracy (1650s-1730s), Boston saw its fair share of buccaneers, both on the high seas and in the courts, including the infamous crew of the Whydah, who were tried and executed in Boston in 1717.

These lawbreakers of the high seas included pirate William Fly and two of his crew mates. William Fly headed up a mutiny against the captain of the Elizabeth and after ridding the ship of the captain and the first mate, sailed the ship as Fame’s Revenge on a very unsuccessful piratical voyage before being captured and brought to Boston for trial. Fly and two of his crew members were executed and then their corpses were brought to Nixes Mate for public display. While burglars and murderers were executed in the Boston Common, the chained corpses of executed pirates were often displayed at the entrance to major shipping ports as a harsh warning to any sailor who was tempted to sail under a pirate flag.

So next time you are traveling through The Narrows and tempted to try your hand at piracy, let Nixes Mate remind you that Boston has little patience with those who engage in crimes upon the high seas.