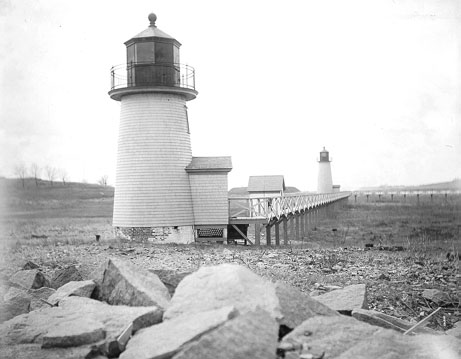 Amidst rock strewn shoreline and the drumlin meadows of Lovells Island resides a unique history that is part of the kaleidoscopic makeup of the Boston Harbor Islands. The remains of an oil shed are the only fragments from the time the island housed the Lovells Island Range Lights. These lights were beacons to marine vessels traveling in the South Channel to reach Boston.

Built in 1903, the Lovells Island Range Lights were constructed for ship captains to use as navigation tools as they passed through the rocks and shallows of Boston Harbor. The Range Lights were built 400 feet apart and had slightly different elevations. They were connected by a seven foot high wooden walkway that also joined the lightkeeper’s house and oil shed. If the ships travelled along the correct bearings, the lights would perfectly align with one behind the other. If the lights did not align, the captains knew they had to correct their course for fear of wrecking the ship.

The Boston Harbor Islands formed some 15,000 years ago as the result of glaciers slowly receding from the area, which raised the surrounding sea level and isolated the islands. These types of barrier islands are only found in Massachusetts and off the coast of Ireland. Lovells Island is situated close to the outer edge of the harbor, 7 miles from Boston and a little more than a mile from the city of Hull.

Named after Captain William Lovell, an early settler of Dorchester, the island has seen several shipwrecks. The most famous, the French warship Magnifique, ran aground in 1782. Throughout the years, people have thought they had discovered “treasure” from that shipwreck. The Humane Society of the Commonwealth of Massachusetts paid for the construction of “refuge or lifesaving huts” in 1787 after survivors from a shipwreck came ashore at Lovells Island, only to perish from the elements after a blizzard in the winter of 1786.

Native Americans used Lovells Island seasonally for fishing, gardening and trading. In colonial times, Charlestown received permission to harvest timber and fish from the island. Like many of the other nearby islands, it was also used as a quarantine station in the 1600’s. Fort Standish was built on the south end of the island in 1907. A variety of different machinery was placed there: such as three six inch disappearing guns, three ten inch disappearing guns, three three inch anti-aircraft guns and three three inch field guns. A few army families lived on the island as caretakers and the Army would practice firing the guns at different targets, some towed by plane. Fort Standish was deactivated in 1947.

The Range Lights stayed lit with kerosene. Captain Jennings would bring oil up to the lights at each sunset and place the oil in a reservoir tank. The oil slowly dripped throughout the night until the following sunrise feeding the wick of the lights, keeping it safely lit, according to Harold Jennings book. The wick also required trimming, bringing it down to its lowest point and then smoothing away what had burned so the wick would burn evenly. This is how the term “wickie” came about.

The taller tower light had a three foot diameter concave disc inside, made of nickel, plated with silver. It was kept brightly polished and it had a slot where a lamp would go through, its light reaching 15 miles from shore. The little tower had prisms and the kerosene lamp gave it light.

Many lighthouse keepers, including Charles Jennings according to his son, warned about “keeping your fingers off the brass work.” Each keeper had to repeatedly polish all the metal surfaces in their lighthouse or light station. The never-ending task gave birth to a poem Brasswork or The Lighthouse Keeper’s Lament.

The devil himself could never invent,

And in Uncle Sam’s service about ninety per cent,

The lamp in the tower, reflector and shade,

The tools and accessories pass in parade

As a matter of fact the whole outfit is made

And when I’ve polished until I am cold

And I’m taken aloft to the Heavenly fold

Will my harp and my crown be made of pure gold?

Jennings, Harold B., A Lighthouse Family: Growing Up at the Lovells Island Range Lights. Hingham, Friends of the Boston Harbor Islands, 2015.