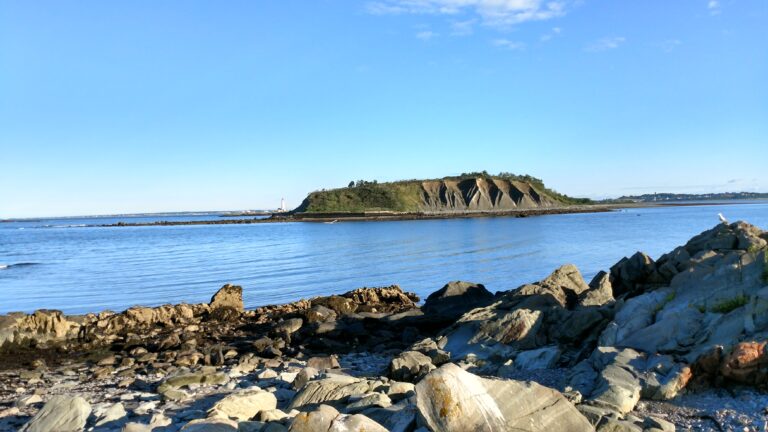 In early June of 2021, the National Trust for the Preservation of Historic Places released its list of the eleven most endangered historic sites across the United States. Sites included in the list are considered to have significant exposure to hazards such as climate change, vandalism, and inappropriate urban development. One of the sites featured in the list is none other than Boston Harbor Islands National and State Park.

The National Trust’s designation is a challenge and an opportunity. We will need to work together across all partners and communities to go further than the national and state park protections that are already in place. The collaborative park management structure, through the Boston Harbor Islands Partnership, has become a national model for landscape preservation in which all partners work together to manage park resources.

In the Greater Boston area, over the next fifty years the effects of climate change will include greater frequency and severity of storm surges, particularly from Nor’easters. As a resultthe Boston Harbor Islands landscapes will be more susceptible to increased rates of erosion and more frequent flooding. Climate change is also causing sea levels to rise, impacting both the islands and the mainland, as tides creep further and further inland. We are also seeing a steady increase in temperatures in the area, with a greater percentage of days with extreme heat than ever before. This is concerning especially for vulnerable populations in the cities..

While the inclusion of the islands may have a sobering effect, for those organizations that have been working on this issue for decades, this comes as no surprise. As a center of higher education, Boston has been addressing the issues of climate change and sea level rise for several decades. A few years ago, the Museum of Science placed “ostriches” (to symbolize the head in the sand mentality) along the shoreline showing where the water would end up in the next few decades. Studies have shown that by the 22nd century the high tides will inundate Quincy Market and lap at the steps of Faneuil Hall. Examples of ‘smart growth’ in recent decades  are buildings constructed with utilities on the rooves “breakaway” windows on the first floors to allow the seas to rush thru and cause lesser damage during extreme tides and massive storms. Virtually all planning in Boston today takes climate science into account, which mirrors the policies of the Commonwealth of Massachusetts, and the federal government.

For thousands of years the Massachusett people lived in balance with island resources, yet  whenEuropean settlers arrived in the late 16th and early 17th centuries, the islands became resources to use. At the time of the American Revolution, there were approximately 75 islands in the harbor. Now there are 35. Some were so small they just “disappeared” under the waves. Others were mined and dumped on and used to create larger islands from smaller ones- such as Logan Airport. Others, such as Castle Island, are now part of the mainland as Boston “made” land in ever increasing acreage in the 18th and 19th centuries to accommodate an exploding population.

Today we see the islands in a different light. They are a place to escape from the modern day “rat race”; a place to relax and reflect “far from the madding crowd.” Instead of carving out resources from the islands, we are giving back by planting native plants and restoring natural habitat as a means of mitigating the effects of the “super storms” and rising oceans. Scientists and planners are considering how to work with nature and new technologies to adapt the islands to the inevitable changes that are coming. NPS and partners have several initiatives underway to restore the islands, including the Stone Living Lab, which is studying nature-based resilience solutions & asking everyone to become climate stewards. Another initiative, led by the City of Boston, will create a Boston Harbor Islands Archeological Climate Action Plan. Despite the initiatives underway, we know that more work must be done to combat the effects of a changing climate – might you have the next big idea?

For anyone wondering what they can do to help the Harbor Islands, plan a trip & bring a friend who has never visited. Share why the Harbor Islands are important to you. Join a stewardship event, where you can help preserve the island resources. Check out the work our partners, like Boston Harbor Now, are doing to provide free access and prepare for climate change.