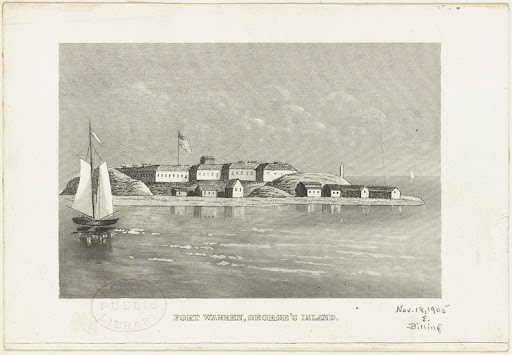 Did you know that the songs “John Brown’s Body” and “The Battle Hymn of the Republic” have a connection to Georges Island?

In April of 1861, the Second Battalion of Infantry was stationed at Fort Warren. At the time, the construction of fort was mostly complete, but the regiment was tasked with moving construction debris. To pass the time and make the monotonous work go by quicker, the men enjoyed singing together. The men sang popular songs of the day, including “Sweet Ellen Bayne” and “America”, and a favorite of the group was a Methodist hymn called “Say Brother Can You Meet Us.”

One of the singers, was a man by the name of Sergeant John Brown. John Brown was well liked amongst the men and was often teased for sharing a name with the controversial abolitionist, John Brown of Harpers Ferry. It is in this teasing that the first lyrics of the song came to be. The story goes that two soldiers returned to the fort one evening and when asked about the news they replied, “John Brown’s dead”, to which another soldier responded, in the tune of “Say Brother Can You Meet Us”, “But his soul goes marching on.”

Another verse is said to come from a training exercise, where John Brown’s knapsack was far too big in comparison to his body, and the other soldiers made fun of the way that it looked. He replied, “John Brown’s Knapsack is strapped upon his back and his soul will march as far as any of you!”

By June of 1861 the Second Battalion Infantry was disbanded, and most of the troops became part of the 12th Massachusetts Volunteers, led by Daniel Webster’s son, Colonel Fletcher Webster. According to the regimental history of the 12th Massachusetts volunteers, “the song originated with Second Battalion of Infantry while it was in the fort, it had been enthusiastically adopted by the Webster Regiment.”

Initially it was suggested by an officer that the name be changed to honor a colonel who had recently been killed in Alexandria, as they were afraid that it was glorifying John Brown from Harper’s Ferry. Despite this, they decided to keep the name “John Brown” and soon the 12th Massachusetts was given orders to go to the front. The troops were thrilled, as they were starting to grow antsy waiting for orders, and it was already late July.

As the troops marched into Boston they sang the song twice, once on State Street and again in Boston Commons. The crowd loved the catchy new song. The troops continued to sing on their way to the front, once in New York, this time with a band. They sang again in Baltimore and soon, the regiment was known for their singing and were often called the “Hallelujah Regiment”, in addition to “Webster’s Regiment.”

Poet Julia Ward Howe heard the troops singing the song at an event in Washington D.C and soon after published a poem titled “Battle Hymn of the Republic,” a poem which is widely associated with the same tune as “John Brown Song” and “Say Brother Will You Meet Us.”

The 12th Massachusetts was engaged in heavy fighting in the battle of Second Bull Run, Antietam, Fredericksburg and Gettysburg. By the time the 12th Massachusetts mustered out in 1864, Sergeant John Brown was dead, along with 840 of 1040 men that had left Fort Warren singing. They vowed to never sing the “John Brown Song” again. Black and white image of the parade grounds. There is grass in the foreground and a few trees in front of the fort. The parade grounds on a sunny day. There is a sign marker in the foreground and the fort In the background of the photo.