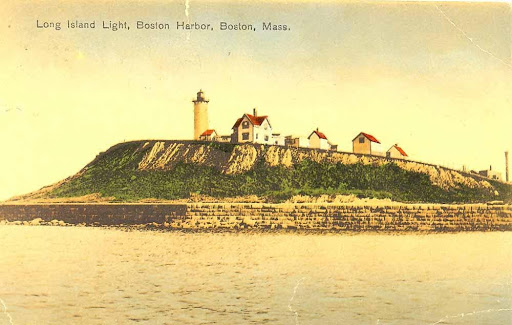 Image description: A white tower with a black beacon is on the right, with puffy clouds in the background and a small shrub to the left.

Light: Original: Three and One Half Order Fresnel Lens

Of all the islands in Boston Harbor, Long Island has one of the most interesting and diverse histories. The land was home to Indigenous Peoples for thousands of years before European contact, and was used to imprison these same peoples during King Philip’s War. Long Island saw the arrivals and departures of pirates, soldiers, farmers, refugees, and people seeking support in battling addiction, homelessness, and chronic illness. It makes sense that an island with so many stories and identities would also be home to a frequently-changing lighthouse. Image Description: Historic postcard shows an illustration of a lighthouse with multiple smaller buildings to its right. The buildings sit on a sloped cliff with green plants below, and a man-made wall below that. Text on the top left of the image reads: Long Island Light, Boston Harbor, Boston, Mass.

As early as the late 18th century, the city of Boston recognized the need for navigational aid for ships crossing the Broad Sound Channel. The first Long Island light station was installed on a northern hill in 1794. Soon after in 1819, Congress commissioned a new, larger, and sturdier tower. Many lighthouse keepers at the time he War of 1812.

In the 1840s the Long Island Head Light underwent multiple inspections, the results of which were less than satisfactory. Hard winters in the Boston Harbor resulted in cracked and broken glass, rotting wood within the tower, causing leaks, and decreased stability of the entire structural foundation. It was clear the lighthouse needed a total overhaul. In 1844, the South Boston Iron Company completed construction of the first cast-iron lighthouse in the United States, which stood on the site of the original Long Island Head Light. The lighthouse was reconstructed again in 1881, and came to its final form in 1901. This structure is recognizable by its white tower and black lantern, though today the lighthouse is largely obscured by trees. Image Description: A spiral staircase within a red brick tower

In 1918, lighthouse keeper Edwin Tarr passed away, and his position was never refilled. Custodians continued to light the beacon until 1929, at which point the lighthouse was automated.

The lighthouse was discontinued in 1982, and shortly after, in 1985, the US Coast Guard installed a solar-powered light, which still operates today. Since the 1980s, many people and organizations have recognized the need to preserve the history and navigational significance of Long Island Light. In 1987 the lighthouse was added to the National Register of Historic Places, and in 2011 the National Park Service acquired the lighthouse, making it the only property on the Boston Harbor Islands solely owned by the federal government. Image Description: View from the top of Long Island Light overlooking the blue water of the harbor. Boats and Deer Island are visible in the distance.

In 2014, Long Island was evacuated and the bridge connecting it to Moon Island was demolished the following year. Since then, the island has been closed to the public. But structures like Long Island Light still remain–living artifacts that have been witness to so many events and people throughout time, and will hopefully live to see many more. Image Description: A white cylindrical tower with a black top is shot from below in front of blue skies.