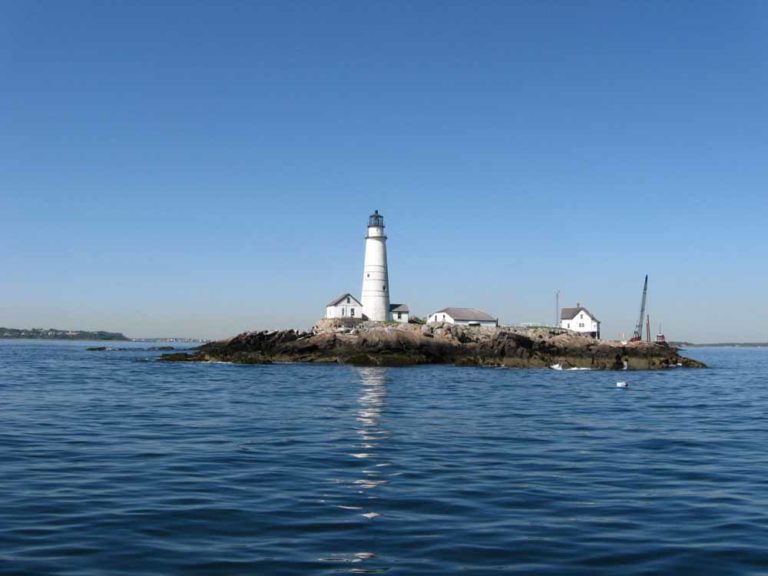 Destroyed in 1776 by British, re-erected in 1783 as first US lighthouse

Lighthouses have the ability to capture our imagination. To some they conjure up scenes of stormy seas, loneliness, and isolation. To others they reveal great beauty, reminding us of our intimate relationship to land and sea. For thousands of years lighthouses stood as beacons of hope, helping sailors navigate through treacherous waters as they searched for their guiding lights. The lighthouses of the Boston Harbor tell these stories and more through their history, their triumphs, and their tragedies. Within this series we’ll explore a few of those beacons, putting a ‘spotlight’ on a different lighthouse each edition. For our inaugural focus, we’ll start with perhaps the most recognizable of the series: Boston Light.

In the 1700s, Boston was Britain’s busiest North American port, trading in goods from all over the world. The natural geography of the harbor though was not the easiest to navigate, with shifting tides alternately revealing and hiding deadly rocks and shoals. This resulted in the loss of many a fortune and sailors to its waters. Finally, in 1715, fed up with continued loss of lives and property, townspeople petitioned the colonial government of Massachusetts to construct a lighthouse at the edge of the harbor, paid for with money raised by a tax on all ships that entered and left the port. One penny per ton would be paid by larger vessels and an annual tax of five shillings for smaller and local vessels. This funded the initial construction and continued upkeep and operational costs of the lighthouse.

Located on Little Brewster Island at the entrance to the harbor, the stone tower lighthouse was completed in 1716 and stood roughly 60 feet tall, most likely lit by a combination of candle and oil lamps. Boston Light first illuminated the harbor on September 16, 1716. Harbor resident George Worthylake served as its first lighthouse keeper. He lived on Little Brewster with his wife, two of his children, two enslaved people, and a hired servant.

Unfortunately, tragedy befell the first two keepers. In November of 1718, while returning from the mainland, George, his wife, one daughter, the servant, and a friend all drowned off the edge of Little Brewster Island. The event inspired a poem titled, The Lighthouse Tragedy, written by a 12-year-old aspiring printer named Benjamin Franklin. The second lighthouse keeper, Robert Saunders, also drowned only a few days into his appointment while on his way back to Little Brewster Island. John Hays was the third lighthouse keeper for Boston Light in as many years and had more luck than the first two. He requested that a fog cannon be placed on the island and, in 1719, acquired one as such, which stayed on the island in service for the next 132 years.

While Boston Light is the first lighthouse station to be built in the territory that eventually became the United States, it is not the oldest standing lighthouse in the country. During the Revolutionary War, the British navy actually destroyed Boston Light by setting off a series of timed explosives as its last act of retribution upon leaving Boston in June of 1776. It remained ruined until after the war when, in 1783, the state of Massachusetts rebuilt Boston Light much in the same style and dimensions as before.

In 1790, ownership of the lighthouse was transferred to the federal government. After serving faithfully for 215 years, Boston Light was the last lighthouse in the country to be automated in 1998. The current keeper of Boston Light is civilian Sally Snowman, the light’s first female keeper. Appointed in 2003, Snowman continues the time-honored tradition in one of the country’s most iconic lighthouses.

“Whereas the want of a lighthouse erected at the entrance to the harbor of Boston hath been a great discouragement to navigation by the loss of the lives and estates of several of his majesty’s subjects; for prevention thereof — Be it enacted…that there be a lighthouse erected at the charge of the Province, on the southernmost part of the Great Brewster, called Beacon Island, to be kept lighted from sun setting to sun rising.”