The Ghost of Boston Light 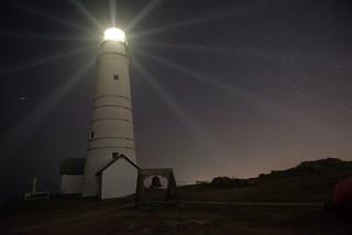 Twelve miles out in Boston Harbor sits Boston Light, America’s first lighthouse. She sits atop the grassy drumlin named Little Brewster, and is kept company by a few small buildings and the lighthouse keepers who have been stationed there to take care of her.

In the summer of 1947 Mazie Anderson and her family spent some time caring for Boston Light. That same summer Mazie met the ghost of the keeper that never left.

Mazie spent her time like the wife of any lighthouse keeper would, caring for her family, roaming the 1.5 acre island’s shore and assisting her husband in keeper’s duties. One day, while out on the beach Mazie heard footsteps behind her. She turned to see if it was her children, or perhaps one of the other lighthouse keepers, but no one was there. She brushed off the experience, “blamed it on shifting rocks and thought no more of it.”

That evening, Mazie lay awake after she felt a presence in the room, but again looked around to find no one. She heard a maniacal laughter in the distance, coming from the boathouse, which her husband reassured her was only a loon.

Summer turned to Fall, and one day in early November the other keepers had to go ashore, leaving the Andersons as the only people on the island. Russ, Mazie’s husband fell ill with a fever, and went to bed shortly after noon. Fog filled the Harbor in the early evening, and Mazie went to Russ to see about starting the foghorn engine. As she reached the top step before their room, she heard the engines start up, and the foghorn called out into the Harbor. “Who had started the engines?” Mazie asked herself. Mazie didn’t have much time to think about what had just happened, as night was quickly approaching and the beacon had to be lit. She rushed to the tower, and as she went out the door, she saw the light come on, and a figure illuminated against the lens.

That night she heard the laughter again, “followed by the sobbing of a girl’s voice calling repeatedly “Shaaadwell, Shaaaaadwell!” near the mooring. After a long evening of listening to the cries of the fog horn and the distraught voice in the night, daybreak came. The keepers returned from their trip and were impressed to find that Mazie had started the engines and lit the beacon while Russ was resting. The Andersons left Little Brewster for another post shortly after then.

It wasn’t until years later Mazie read about Boston Light’s first keeper, George Worthylake. One day in early November Worthylake, his wife, and daughter were visiting a friend who had anchored nearby the island. His other daughter and an enslaved man stayed behind to wait for their return. Upon their return, the enslaved man paddled out to the mooring in their canoe to bring them ashore. Tragically, the boat capsized and all went overboard, the cries of the girl were the last to be heard as they were taken by the sea. No one survived despite the enslaved man’s attempts. Records show his name was Shadwell.