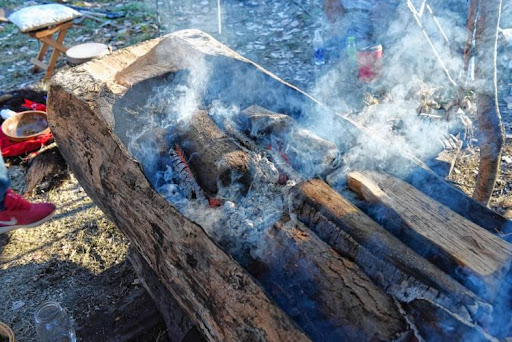 A thousand years ago, when only the Vikings were making their way across the pond, Boston Harbor was filled with mishoons, traditional canoes used by the indigenous people, to move up and down the coast and from island to island.  The construction of the mishoons is a tradition going back at least 10,000 years passed from generation to generations. In pre-colonial times, there were even mishoon societies, making mishoons that held up to 40 people. For more than 350 years, the mishoon has been absent from the waters of New England. Now that has changed.

On the evening of Monday, 31 October 2022, as thousands gathered around Monument Square in Charlestown to celebrate Halloween, Ande Strongbearheart, the Gaines Cultural Steward of the Nipmuc Tribe, kept watching over the burning of a traditional mishoon. For the first time in over three hundred years, such an activity has taken place within the town (city) limit of Boston

Boston, along with many cities and towns all over the United States passed what are known as “Sunset Laws”, which forbade certain minorities (Especially Native Americans and African Americans) from remaining in the town or city limits after sundown. Boston enacted their law during King Phillip’s War (Metacomet’s War) in 1675 at the time men, women, and children were taken out to the Harbor Islands and abandoned there to starve.  Boston repealed the ordinance in 2005 after an international convention of journalists refused to hold their convention in Boston as long as the law was on the books. Although most, if not all of these laws are not practiced, many still remain on the books.

Burning the mishoon is a traditional skill that has been practiced by indigenous tribes throughout New England for thousands of years. Once a suitable log is obtained, hot coals are heaped upon it and then the charred wood is carefully scraped out to form the body of the mishoon. This continued heating and scraping stimulates the sap within the wood to seal itself and make the finished mishoon waterproof.

Burning the mishoon is not a one-person job as the fire has to be tended round the clock. Working with Andre Strongbearheart on the Boston mishoon was Thomas Green from the Massachusett Tribe at Ponkapoag. Although the mishoon burning was within Boston, it was also on traditional Massachuseet land and Andre Strongbearheart had to ask permission from the Massachusett for this undertaking. Not only was permission given, but the two tribes worked side by side on this special project, making it a truly historic undertaking.

The weeklong ceremony brought many out to observe and participate. Strongbearheart has been burning mishoons for the last several years with the aim of getting alive his tribe’s traditions and educating the general public on the importance of preserving these traditions.  The great majority who visited expressed support, although at least one expressed his opinion in a negative fashion.

Getting permission to burn the mishoon in Charlestown took about 5 months of finding the right spot, convincing local leaders, and securing the numerous permits to keep a fire going for a week or more withing the city. All of this effort along with a $20,000 grant from Olmsted Now’s Parks Equity and Special Justice Projects got the project started.

Strongbearheart sees this as the first of many mishoons that he would like to see built to allow the local tribes to meet on the water of Boston Harbor as they once did.